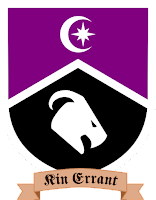 
"Per chevron purpure and sable, a chevronel argent, in chief around a mullet of four greater and four lesser points argent a moon decrescent argent, in base a goat’s head to sinister couped argent."

DESCRIPTION
Kin Errant acts as a circle of clever entertainers, friendly vagabonds, experienced mercenaries, crafty merchants, and resourceful scouts who all share the common element of having been forsaken or banished from their families due to some perceived "muddying" of royal blood. Kin Errant welcomes any and all who seek sanctuary from the political hardships and oppressive restrictions of bureaucracy while plying whatever trade that fits their fancy.

Kin Errant seeks to encourage and enlighten all members within their inner circle to master their respective trades in a casual and rich Role Play community.

HISTORY
Lando the Lost Satyr sought to find his way to the land known as Satyr's Crossing, hoping to discover and reconnect with his troubled ancestry. His adventure to the land was not without harsh lessons, dark realities, and painful truths. Despite these trials Lando had found many who he had come to call his fellow "kin of adventure", children of the road who had been outcast for circumstances out of their control and yet had found a way to wield their circumstances for their own better good.

Upon arriving at Satyrs Crossing, Lando failure to find his father's history instead allowed him to find a circle of like-minded souls. Souls who all shared a very troubled past, most of which were forced upon them due to "muddied blood". Lando acted to unite them all, providing a louder voice and more prominent presence to help nurture the advancement of their skills and talents. It was at these crossroads away from their mutually traumatic origins that they had found a new, more enlightened path, and it was at that time the Kin Errant was founded.

Although many claim Kin Errant to be similar to that of a formal house with lands and armies of their own, Kin Errant instead can be found frequenting the halls of taverns, around the campfires of traveling caravans, or at any gathering of souls worth entertaining to which the Moon's light blesses. Not a family to call any one place home, their home is instead within their hearts and those who they choose to share their company with.